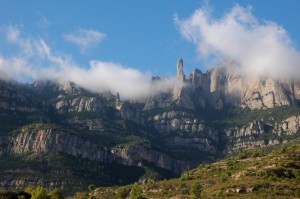 One of the pitfalls of extensive travel is developing a higher ‘wow’ threshold, of, like an adrenaline junkie seeking ever-increasing danger in order to get the pituitary glands pumping endorphins, needing more spectacular scenery or more exotic architecture to impress you. The first time you fly over the Alps you’re glued to the window – by the fifth time you’re probably watching the in-flight entertainment.

Montserrat, and the monastery nestled beneath its jagged peaks, don’t cross the ‘wow’ threshold – they demolish it.

The compact Montserrat range, only 10 km long and 5 wide, appears higher than it is (the highest peak, Sant Jeroni, is only 1,236 meters – 4055 feet) because it rises straight from the valley of the Llobregat River without bothering with such petty distractions as foothills. Seen from a distance the mountains seem to hover above the plain, the craggy peaks (Montserrat means ‘serrated mountain’ in Catalan) providing an operatic backdrop to many of the area’s vineyards. 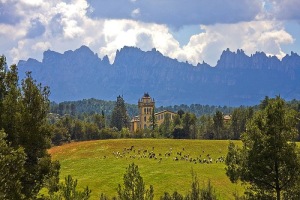 The origins of the monastery date from around 900 AD, when a handful of monks built small huts at the site. With the buses constantly rolling in, the museum, souvenir shops, grocery store and hotel, it takes some gymnastics of imagination to envision how remote and wild the place must have been at the time, but it must have been an incredibly fierce and isolated landscape.

A Benedictine monastery was founded in 1025, and the first pilgrims began to trickle in to see ‘La Moreneta,’ the Black Virgin of Montserrat. She’s still there, ensconced behind glass but with an orb symbolizing the universe left exposed – the tradition is to touch the orb to ask for the Virgin’s intercession. (If you’re dying to do so, expect about a 20 – 45-minute wait. That trickle of pilgrims is now over 2 million visitors a year, and lots of folks want to touch this lady.)

Said to have been carved in Jerusalem over 2000 years ago, carbon dating has actually demonstrated that it is most likely a Romanesque wooden sculpture from the late 12th century, ‘only’ about 800 years old.

Napoleon’s armies sacked the place in 1811 but La Moreneta survived, hidden away by monks, many of whom didn’t make it out of the ordeal alive. It wasn’t until 1844 that restoration work on the monastery began, and in 1881 festivities were held for the Coronation of the Image of Our Lady, at which Pope Leo XIII declared the Black Virgin patroness of Catalonia. She, and the monastery in which she resides, remain important to the spiritual and cultural identity of Catalans.

Most visitors arrive on day trips from Barcelona, only about an hour away. There are a number of ways to reach Montserrat, and many people opt for a guided bus tour from the city. Several operators run tours that include different packages, including a combination Barcelona/Montserrat day trip, as well as half-day trips to the monastery.

Taking the train up

These have the advantage of providing a great deal of information about the monastery and its surroundings, but they can be quite spendy (expect to pay around 150 Euro for a family of four), and of course you have fairly tight time constraints which won’t allow you to do any hiking on the mountain.

And you’re going to want to hike. Leave the hordes behind down at the monastery, and take one of two funiculars  – the Sant Joan and the Santa Cova. Both leave every 20 minutes, more frequently at busy times.

If you decide to walk down to the Santa Cova (sacred cave), an easy 40-minute trail descends to the site; along the way there are statues depicting scenes from the life of Christ. You can then take the funicular most of the way back up, trimming about 30 minutes from your return trip.

Looking down at monastery from nature center

The Sant Joan is the more spectacular of the two, rising 503 vertical meters and depositing you at the Nature Center at the top. From there several trails wind through the mountains – all are fairly easy and suitable for small children. We took a picnic lunch to one of the summits, spread out in the sunshine, and watched climbers scaling nearby rock faces, ravens and Bonelli’s eagles riding the thermals rising from the valley floor, and black redstarts tail-bobbing about the scrubby vegetation. (Birders might want to have a look here for more information.)

The scenery simply beggars belief, and every turn in the trail elicited a ‘Jesus!’ from me – and I wasn’t praying. I’ll let the photos speak for themselves.

If you don’t want to do an organized tour of Montserrat, there is another easy – and cheaper – option. From Barcelona’s Plaça d’Espanya, a train leaves every hour that will take you to either the cable car (get out at the ‘Aeri de Montserrat’ stop) or the rack railway (continue on to the ‘Monistrol de Montserrat, stop) – both are spectacular. There are a number of ticket options, from simple round-trip tickets to those including lunch and entrance to the monastery museum, so it’s best to decide in advance which best suits your needs.

If you get an early start the trip can be done in half a day, and the monastery, the natural setting, and the spiritual and cultural significance of the place warrant the effort. It’s infinitely family-friendly, with trains, cable cars, funiculars, easy yet stunning hiking trails, shops and fountains and lots of space to run and roam.

If you’re in Barcelona for 3 days, should you make the trek to Montserrat? Well, given all that there is to see in the city, probably not. But if you’re going to be there for 4 or more days? Definitely. And let me be clear here: absolutely, unequivocally, indubitably, most, most truly, definitely.

4 thoughts on “Montserrat – The Spiritual Soul of Catalonia” 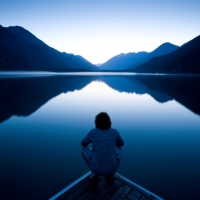