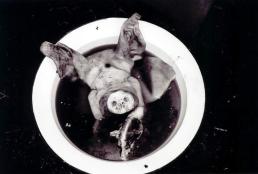 This little piggy had a very bad day

Warning: Some of the text and images in this post are disgusting, even disturbing. As this blog is in large part about travel, I think it’s appropriate to include such cultural experiences as this one, but if you are in any way squeamish you may want to give this one a miss.

The killers came for us in the dark, just before the horizon slit the throat of the night to spill sunlight across the landscape. We had been sleeping for less than two hours, having grabbed what floor space we could in the dusty ‘community center,’ a single-story 1970’s holdover from the Communist Era in the center of a small village slung out along a narrow road that disappeared into the thickening mist.  We had come to slaughter, dismantle, dismember, and everything but defenestrate a large animal.  Some of us were hung over, some of us were still drunk.  We were given more alcohol.  We would probably need it.

My wife and I were in Tabajd, a village of some 900 souls about an hour outside of Budapest.  We were there for what is known as ‘disznovagas,’ meaning, literally, ‘pig-cutting.’  The phrase gave me visions of a seething circle of half-nude people flaring and warping in the firelight, gore-spattered, body-painted, repeatedly thrusting pointed spears at a screaming, wheezing pig, blood spurting from each new jab as we chanted maniacally with lips smeared red, roaring at each other like lions at a fresh kill.  I envisioned “The Lord of the Flies,” clutched my eyeglasses protectively, and thanked God I wasn’t fat.  The reality was both tamer and rather more disgusting.

A proper pig-killing really begins the night before.  We arrived in the early evening and groped up the unlit and rutted dirt road to the ramshackle cottage where the butchering, sausage making and eating would be done, a low-ceilinged amalgamation of earth, brick, stone, straw, and crumbling plaster, the once-solid thatch roof now wispy and frayed. The hosts gave us a dozen loaves of crusty bread, an equal number of onions, some garlic, and our supply of wine for the night – two five-liter plastic jugs, one anemic red, one white…ish.  They also bestowed upon us two liters of szilva palinka, a searing distilled spirit made from plums, which ranges in quality and temperament from smoothly fruity to viciously foul. This particular vintage fell into the latter category.

Skits were perfomed the night before, mostly dealing with dead pigs

Yes, this palinka was like a knee to the groin, but the trouble was, the wine was even worse. Even so, the often hilarious company of our Hungarian friends more than made up for the horrific hooch.

Next morning, acid-stomached and sweater-tongued, the bleary-eyed band of would-be pig slayers trudged in the pre-dawn murk, slipping and side-stepping up the icy mud road and back down to a low-lying row of sties. The palinka bottle was passed around and a few members of the group, including the pig-killer himself, disappeared into the dark sheds. The snuffling and squealing of disturbed porcine slumber filtered through the narrow window slats, and moments later they reemerged, dragging and shoving a thrashing pig along like a demented pushmepullyou. A light rain had begun to fall, drawing an appropriately somber veil of drizzle across the scene.

The next step happened in a blur of movement, like a charcoal sketch smeared across a page. The pig was held down, and the pig-killer used what is called a “captive bolt” stunner, which quickly blasts and retracts a metal spike into the animal’s brain, the idea being to painlessly render the creature unconscious.  It did not, and the pig continued to writhe. A sharp blade flashed out of the slaughterer’s sheath, slicing open the pig’s carotid artery as blood spurt into a waiting metal pan. 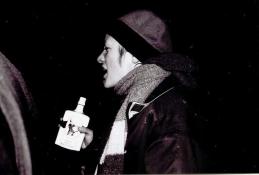 As all this was done, the pig did not squeal. It screamed. High-pitched shrieks filled less with pain than with terror. The circle of faces staring at the scene were drawn, grim, occasionally horrified. A couple of the women were crying. It may have taken one minute or ten for the pig to bleed to death, but the reverberations of those slowly weakening wails seemed to echo for hours.

Once the pig’s last wheeze had died away and the flow of blood from its severed neck become no more than a trickle, the animal was tossed onto the back of a tractor and carted to the butchering site. Here, the first step is to scorch the hair from the carcass. A loud puufftt was heard as the blow torch was fired, and the smell of burning fur filled the heavy air, permeating hair, clothing, skin. Two days of evergreen bubble baths and eucalyptus body wash weren’t enough to get the stink of singed fur out of our pores.

It takes a long time to singe an entire pig, and in the meantime a mixture of fresh blood, onions, breadcrumbs and seasonings – hagymaver, or onion-blood – has been simmering away on a battered gas stove, gradually thickening and coagulating. It is brought out into the muddy courtyard and set on a table along with sliced bread.  Bloody scrambled eggs best describes its texture and appearance – a vampirish breakfast. It is highly prized. It is a delicacy. And, like most delicacies, (think Korean dog soup, sweetbreads, monkey brains, rocky mountain oysters) it is somewhat difficult for those unused to such epicurean delights to stomach.

When the last of the hagymaver is gone and the pig has been scraped of all blackened hair, the butchering begins.  The thick fatty layer is flensed from the body and set aside, later to be ground and added to the sausage filling.

The butchering itself is rather interesting, and since the animal now resembles something you would see hanging in the butcher’s at your local supermarket, it’s only mildly nauseating, like post-nasal drip.

Everyone has a hand in the sausage-making. Mercifully, the intestines used for the casing are from a previously-killed pig, so we are spared the process of emptying and cleaning the fresh (and still full) ones. The grey-white casings coil limply in a bowl of water like a disgorged tapeworm. In an episode of ‘The West Wing,’ the character played by the late John Spencer muses, “There are two things in the world you never want to let people see how you make ’em: laws and sausages.”  Having seen the latter done, I think I’d rather spend a day on the House floor. 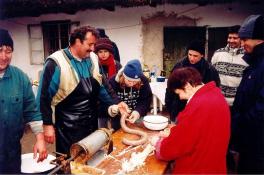 The poorer cuts are ground together with fresh fat, mixed with a good dose of paprika, salt, garlic and allspice, and piled into a metal trough thoroughly disinfected with a cursory spray from a muddy hose and a wipe with what appears to be a rag that was previously the butcher’s undershirt. I know, we have become overly detached from the origins of our food, maniacally obsessed with an unattainable and unnecessary ideal of cleanliness and hygiene. We douse our children with anti-bacterial soap, for Christ’s sake. But surely an old-fashioned session with soap and hot water wouldn’t be too much to ask?

The casings are fed onto the pumping apparatus, rather like trying to apply a condom that has already been unrolled. After everyone has had the opportunity to be on the receiving end of sausage extruding exuberantly into his hands, we sit down to our second taste of our sacrificial pig. This consists of a pleasant and hearty stew that has been simmering since early in the morning. At this point, the meat is sufficiently unidentifiable and detached from the day’s earlier proceedings to be enjoyable, and as we feed our lingering palinka buzz with cold beer, an atmosphere of conviviality pervades the scene. 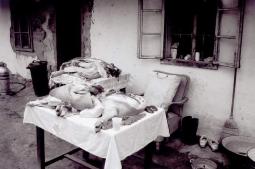 I suppose this would be the ‘after’ shot

It’s still chill and drizzling, and faint traces of singed hair and pig screeches still drift in the air, but a certain solidarity binds the group now. We, with our big-city, supermarket sensibilities have shared an experience far outside our everyday existence, and although some of us remain mildly traumatized, we sense a connection with the food we are putting into our bodies that seems somehow more real, more honest, and more sincere.

Most of us will never witness the unlovely process that moves an animal from pen to plate. If we did, we might take more interest in the lives of the creatures we consume. As we have moved increasingly to industrial farms, where livestock is kept in unspeakable conditions and pumped full of hormones and antibiotics, we have come to see our meat solely in the humming florescent light of the supermarket cold counter. And although it is not necessarily something you want to witness – and I think I would decline an invitation to do it again – perhaps it would benefit all of us to take a look at it in the light of a wan winter sun in Hungary. 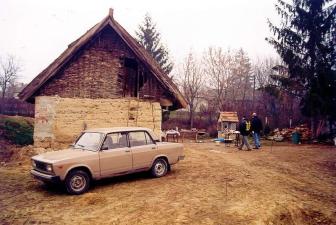 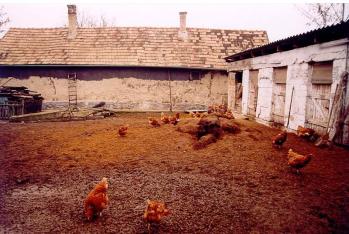 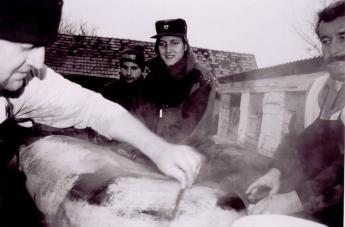 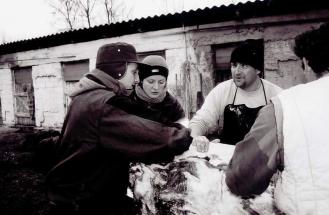